Discovery is one of the biggest challenges for any business on the internet. Evan after SEO work is done we need to provide our own tools for people to find what they are looking for on our sites. Many sites have such a large inventory of products that simple browsing or search is not enough—especially if users only have a vague idea of what they want. One of the biggest problems with search and browsing is that people often lack the right vocabulary or have only a vague idea of what they want. How often have you thought something like; "I need a computer bag and I'll know the right one when I see it"? I wrote about one trick I sometimes use on Amazon with a combination of Search and Recommendations. But it's a little cumbersome.

Another example we implemented was in the form of a "trainer" on our demo video recommender site. This allows new users to thumbs up or down a list of videos and in so doing train the recommender to know what they like quickly.

Recently on Amazon you may have seen a button on product pages inviting you to something they call The SCOUT. They are building a visual search backed by machine learning and once it includes enough inventory (currently it is limited to furnishings) Discovery using Predictive AI will have taken an important new step. 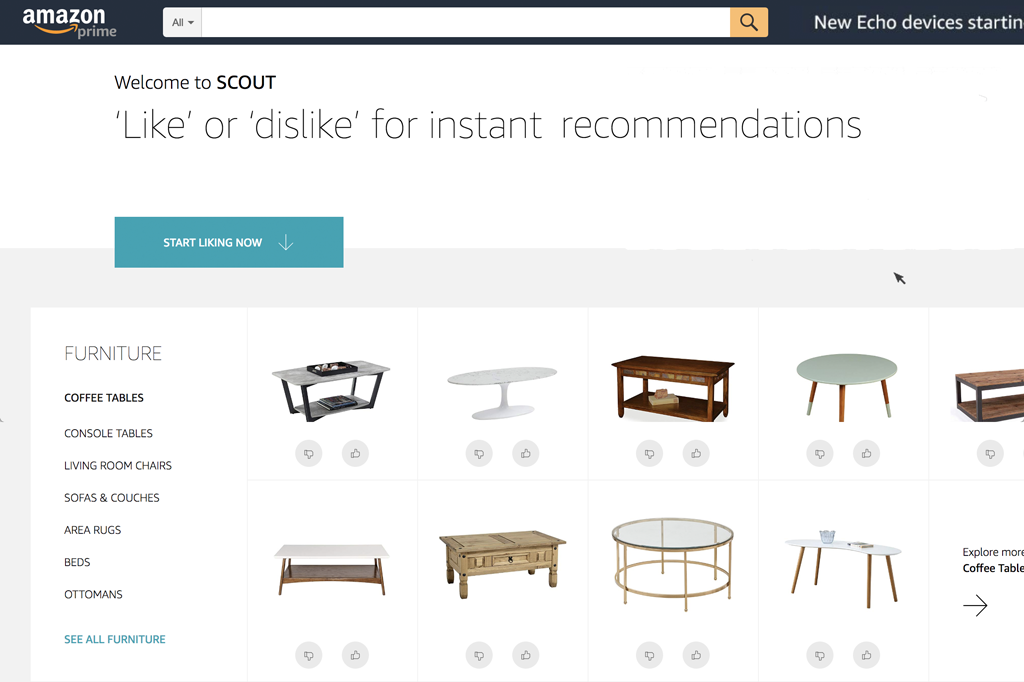 The idea is pretty simple, hit thumbs up or down on images shown to you and Amazon will quickly narrow down to the type of thing you want, without any search terms. It seems like a sort of visual search but there is much more going on behind the scenes so let's reverse engineer the SCOUT to show how predictive and analytical Machine Learning can be used in innovative ways.

The first question is; "how did they pick the products to show?" This might seem obvious but not so fast. The ultimate goal is learning about the user's taste as quickly as possible with the fewest choices. In machine learning analytics this means showing items that have minimal covariance, meaning they are in general preferred by different people. Think of it this way, if two items are liked by many of the same people, then the taste of people who like either items are probably similar. This means that if a new person likes one of the items, they are likely to like the other. We want to avoid showing items like this very often in our scout because we don't get much information if a user picks one of these two similar items. But visual similarity is not a very good measure so we look to variance in the people who have preferred the items—the more different the group of users who prefer the items the more information is gained by a new user liking one (or disliking).

There are many ways to find these items but what we chose in our video recommender trainer, was to cluster products by user behavior and take the top most popular items from these clusters.

The reason for clustering by behavior is that this will find items that are preferred by the same type of people (people who prefer similar things in general). This doesn't guarantee non-covariance but is a descent approximation.

The reason to choose fairly popular things is so that people will have seen them before. This was useful in asking people to like/dislike movies in our trainer and is useful in our hypothetical scout to show styles that people are familiar with.

There are several algorithms and data we could use to do this clustering so we used our own recommender model since it already had scrubbed a large amount of user behavior/preference data and I bet this is what Amazon does too.

A beginner might be tempted to use a curated list of items but this doesn't scale to large inventories or to changing categories and in fact isn't necessarily related to finding non-covariance at all. Remember the old adage "follow the data".

Another couple things are clear from the Amazon UI. Thumbs up and down are the only feedback they ask for. Some might say; "why not get ratings?" The answer I've written about many times—ratings are extremely weak and problematic to deal with. Here Amazon, as you'd expect, has avoided the weak and problematic.

As you click on things you like and dislike new things appear. This gives the illusion that you have only chosen a few since you never see a long list. This makes it into something like a game, more kudos to Amazon.

When SCOUT thinks you have given enough feedback they automatically move to recommending lists of items. IMO they do this a little too quickly but time and data will tell. In any case what data would you look at to judge when to stop the game part of SCOUT? If they see consistent choices in terms of picking things that the same users have liked, ok we are done. The user has expressed a clear preference.

The other thing to take into account is user fatigue, when does it seem like a chore rather than a game? When is the user ready to get on with shopping?

The end result is something like a visual search where you have also trained the recommender about your preferences in an area that you may never have expressed an interest before. I have never bought coffee tables at Amazon but now they have a good idea about what I like.

What style of table was it? I could describe it but the words (since I am not a designer) would probably never work in search. I am actually in the market for a coffee table but would never know how to search for what I found with SCOUT. I just know what looks good to me and now Amazon does too.

Given a multimodal algorithm like the Correlated Cross-Occurrence (CCO) algorithm in the Universal Recommender this data now easily applies to other types of items, again things that I have not bought from Amazon—yet.

A variation on this little experiment can safely turn a site into one that seems to show only recommendations. This idea is the holy grail of recommenders but is strictly speaking impossible since recommenders require the user sees non-recommended item or the recommender with "overfit" and show the same things over and over leading to dropping KPIs like sales. The SCOUT UI uses a trick to show you items that are not recommended under the guise of getting your feedback. We can use this to turn every page into recommendations without overfitting, but that's another blog post.